Giving back to the community in which it serves is at Silver Diner’s core. To celebrate the new opening, Silver Diner has launched a 4-week raffle series where 100% of donations will go towards Real Food for Kids’ work to end hunger in DC’s ward 8.
Silver Diner
1250 Half Street, SE,  Washington, DC 20003
Learn More: https://www.silverdiner.com/ballpark

Select the Amount to Donate

Receive additional entries for sharing the Sweepstakes link on social media and for each donation you bring in.

One winner will be randomly drawn three days after the entry period closes.

EACH WEEK WE WILL ADD A NEW PRIZE PACKAGE. The last day to enter each of the prize packages is November 6, 2022, at midnight. 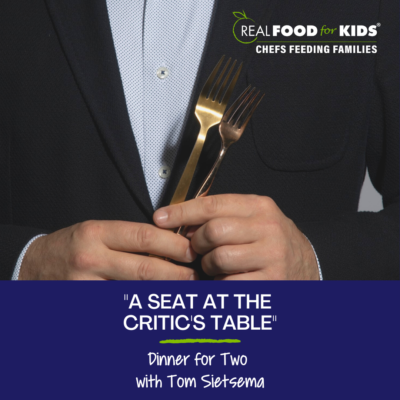 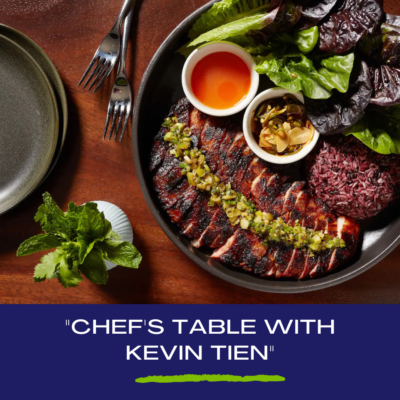 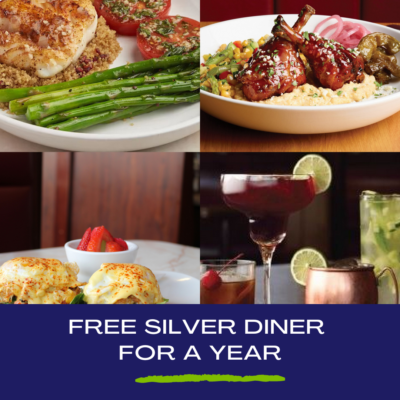 A SEAT AT THE CRITIC’S TABLE

Guess who’s coming to dinner with Tom Sietsema? YOU.

Like most of you, we’ve been counting down to the highly anticipated release of Tom Sietsema’s Fall Dining Guide for 2022 – The Washington Post’s essential guide to the D.C. dining scene.

Donate as little as $10 to Chefs Feeding Families to enter to win an unforgettable experience. The winner and a guest will accompany Tom Sietsema, The Washington Post’s Food Critic and a James Beard award winner, on an anonymous visit to a Washington D.C. hot spot or to one of the District’s best dining destinations. The more you donate, the more chances you have to win! 100% of your donation supports Real Food for Kids’ work to end hunger and bring nutrition security to children and families in DC’s Ward 8.

Tom Sietsema has been The Washington Post’s food critic since 2000. In leaner years, he worked for Microsoft Corp., where he launched sidewalk.com; the Seattle Post-Intelligencer; the San Francisco Chronicle; and the Milwaukee Journal. A graduate of the School of Foreign Service at Georgetown University, he has also written for Food & Wine, Gourmet, GQ, Travel & Leisure, and other national publications. In 2016, he received an award from the James Beard Foundation for his series identifying and rating the “10 Best Food Cities in America” the previous year.

Tom Sietsema is an avid supporter of Real Food for Kids and served as a judge for the 2020 Real Food for Kids: Culinary Challenge competition – an annual event where middle and high school students compete to craft healthy and delicious menu items that meet USDA guidelines and adhere to strict per-meal budgets.

Donate as little as $10 to Chefs Feeding Families to enter to win an unforgettable experience.

The more you donate, the more chances you have to win! 100% of your donation supports Real Food for Kids’ work to end hunger and bring nutrition security to children and families in DC’s Ward 8.

Nick Materese began his journey into the world of food and wine twenty plus years ago. He grew up in food-rich New York indulging in pizza, local foods & Finger lakes wines before moving out to Arizona to spread his culinary and drinking wings. He has managed several restaurants & wine bars as well as helped build numerous highly-acclaimed wine shops & wine lists from the ground up. The dark side finally seduced him though and as much as he loved wine, he followed his liver’s desire and joined Team Arrogance at Stone Brewing Co. The travel bug & the opportunity to teach about food, wine, beer & spirits eventually brought him back to the east coast. Today he works for one of metro DC’s premiere boutique importer’s (Siema wines) and he is also currently pursuing several side projects involving the quest for the perfect pint, eating copious amounts of good food & of course sharing stories about exceptional wine & fantastic spirits.

Cris launched Cris Logan Art in 2017. Although Cris always dabbled in art as a youth, like many creatives, she pursued a more “traditional” D.C. path, working in communications and public policy. When she became a mom, she took a sabbatical from her career and began painting for her own home and kids.

Cris has lived and worked in the D.C. metro area since 2001.  She is a huge fan of the Nats and the Capitals and she never tires of discovering new beauty in the city she calls home.

Spend an unforgettable evening with great food and friends in the comfort of your own home.

Donate a minimum of $10 for a chance to win this intimate dining experience. The more you donate, the more chances you have to win!

The Chef’s Table Experience includes an exclusive six-to-eight course meal for up to 8 people prepared by award-winning Moon Rabbit chef Kevin Tien in the comfort of your own home. The menu will reflect Chef Tien’s life experience–a finely tuned combination of Japanese, Vietnamese, and Latin American influences. 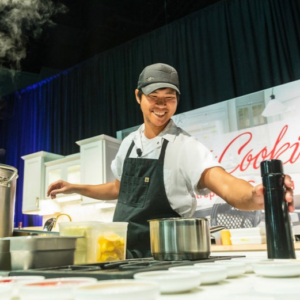 Chef Kevin Tien’s most recent restaurant venture, Moon Rabbit, named for the virtuous rabbit in the Buddhist Jataka tale, is a modern Vietnamese restaurant located in the heart of The Wharf in Washington D.C. An innovative approach to Vietnamese cuisine best describes acclaimed Chef Kevin Tien’s unique and complex menu, intended to be a love letter to his heritage as a first-generation Asian-American. It evokes memory, honors history, references globally-inspired techniques and spotlights reinterpreted takes on regional Vietnamese dishes. In addition to Moon Rabbit, Chef Tien is the owner of local-favorite, Hot Lola’s, a spicy chicken emporium in Arlington.

Since the opening of his very first restaurant, Chef Kevin Tien has garnered national attention and accolades from all corners of the United States.   Tien has been recognized by Food & Wine magazine as one of 10 “Best New Chefs;” Washingtonian magazine as one of the “Ten Young Chefs Shaping Washington’s Dining Future;” EATER as a “Young Guns” semifinalist and the James Beard Foundation—both as a “Rising Star Chef of the Year” and “Best Chefs in America” semifinalist as recently as 2019.  Tien was also named Washingtonian Magazine’s and Washington Business Journal’s 40 under 40. Kevin was the first civilian recipient of the 2019 Award for Leadership and Innovation by the U.S. Department of State’s AAFAA Asian American Foreign Affairs Association.  In 2019, one of Kevin’s recipes was included in Grammy-Award-winning Questlove’s cookbook, “Mixtape Potluck”. Chef Tien also competed against other contestants in the fierce season 2 of “Iron Chef Gauntlet”, on the premiere of “Chopped: Next Gen” and most recently on “Bobby’s Triple Threat”.

FREE SILVER DINER FOR A YEAR

In celebration of its first location in DC, Silver Diner is partnering with Real Food For Kids’ Chefs Feeding Families to give back to our local community.

Donate a minimum $10 for a chance to win Silver Diner for a year (gift card value $1,040). All proceeds raised will support the work of Real Food for Kids’ Chefs Feeding Families, a local non-profit initiative that has provided over 225,000 nourishing meals to school children and their families facing food insecurity in our communities.

Silver Diner has Something for Everyone updated for today’s lifestyle. Whether you’re vegetarian, vegan/plant-based, gluten-free, or a traditional diner lover, there’s plenty to choose from. And with Chef Ype’s Flexitarian™ menu featuring healthier, customizable options, you can eat as healthy or hearty as you’d like.

Silver Diner’s menu features the highest quality products from more than 15 local farms. Chef Ype then creates dishes that make the most of what’s in season in our area.

WHAT YOU WANT, HOW YOU WANT IT

With 16 locations in the DMV, there is a Silver Diner near you. Choose from dine-in, carhop pickup, or delivery from SilverDiner.com.Enter today, and often! The deadline to enter is August 8, 2021, at 11:59 p.m. EST.

EACH WEEK A NEW PRIZE PACKAGE WILL BE ANNOUNCED.

Launched at the onset of the COVID-19 pandemic, Real Food for Kids: Chefs Feeding Families is a joint initiative with Washington, D.C. metro-area chefs, and restaurants to provide nutrition security to school children and their families. Chefs Feeding Families, which began as an emergency response, providing hot, prepared meals to alleviate the unprecedented demand for food assistance, also employed restaurant workers who might otherwise have been furloughed. The program has evolved to a more sustainable model, providing meal kits and produce bags that include recipes, easy preparation tips, and nutrition information in a bilingual format to inform and inspire the preparation of nourishing meals at home.

About Silver Diner
With restaurants throughout Maryland, Virginia and New Jersey, Silver Diner is the preferred local restaurant for families seeking high-quality and healthier choices. Built on the values of integrity, quality and putting people first, the first Silver Diner was established in 1989 in Rockville, Maryland. Since then, Silver Diner has grown to own and operate 21 restaurants, serving three million customers yearly throughout the Washington, D.C. Metro Area. Executive Chef Ype Von Hengst ensures that food quality is a top priority, incorporating local ingredients wherever possible. By purchasing fresh and local ingredients, such as hormone free, all-natural meats, milk free of bovine growth hormone and free-range chickens, Chef Ype keeps menu items chef-driven and customer-focused. In addition, Silver Diner serves vegan, vegetarian, gluten-free and low-calorie items. The Silver Diner Kids Menu has won national accolades for its healthy items and has been part of a Tufts University research study on what restaurants can do to effectively encourage children to eat healthy.

Donate to increase access to healthy food for every child.